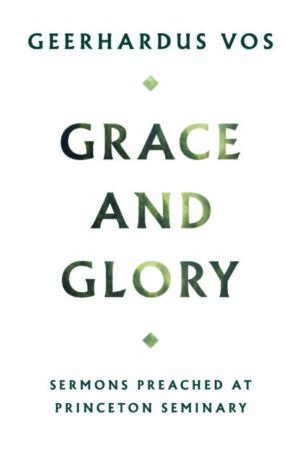 5 in stock (can be backordered)

In possessing a copy of Grace and Glory the reader has in his or her hands a book of sermons which are almost as rare as they are remarkable. Not only so, but in addition to the six sermons which originally constituted the volume Grace and Glory the present edition includes a further nine sermons which Vos preached in the Chapel of Princeton Theological Seminary between 1896 and 1913, as well as an undated exposition of Ephesians 2:4, 5 translated from Dutch. This additional material has been provided to the publishers by James T. Dennison, the Librarian of Westminster Theological Seminary in California and the editor of the journal Kerux, in which the bulk of it has already been printed. Mr Dennison originally uncovered Vos’s personal sermon book in 1971 in the Heritage Hall Archive of Calvin Theological Seminary and transcribed the material.

As heirs of his labours the publishers are also indebted to the Heritage Hall Archive of Calvin Seminary for the privilege of reproducing the material in this more permanent form. But the uniqueness of these sermons extends far beyond the difficulty of obtaining the original edition of Grace and Glory or the providences which led to the rediscovery of the manuscript material now in book form for the first time. It is the nature of the sermons themselves which will have a stunning effect on the reader. For they combine such constantly penetrating depths of biblical and theological understanding with such soaring heights of eloquence that it is difficult to imagine their like being heard in any pulpit in the world today. They are at one and the same time intensely demanding on the reader and glorious in their exposition of Scripture. These pages contain a thesaurus of theological riches, a gold mine whose every vein is packed with gleaming insight. Such is the character of these sermons that, to a world which is obsessed with ‘sound-bites’ and in a church which has become unused to concentrated thought, their content and style may seem almost overwhelming…In these pages the reader is invited, almost commanded and certainly demanded, to become a spiritual mountaineer. There are times when many will be left gasping for the higher oxygen levels of the lower slopes. But Vos was aiming for the summit, and those who follow him there will find panoramic views of the wonders of God and his ways which will make the ascent immensely rewarding.

Here, then, is material calculated to enrich the mind, heart, will and emotions; grace and glory indeed.

— From the Introduction by Sinclair B. Ferguson

Be the first to review “Grace and Glory” Cancel reply