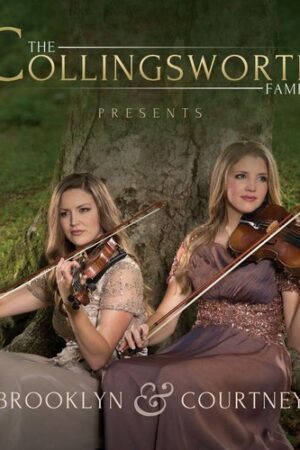 When you attend a Collingsworth Family concert, it’s more than singing. Of course they are known for their beautiful lush harmonies, but they are also known for their superior instrumental work. Both Phil and Kim Collingsworth have recorded award-winning instrumental tracks, but now it is time for the next generation to shine as StowTown Records and The Collingsworth Family present Brooklyn and Courtney. Both sisters are well versed as violinists, and fans have been asking for a full-length feature for years. Classics, hymns, Classical numbers and popular songs can all be found in this grand effort. From the epic arrangement of You Raise Me Up, to the simple and heartfelt What A Friend We Have In Jesus, to the toe-tapping Keep On The Firing Line, there is variety and virtuosity in each performance.

Be the first to review “Brooklyn & Courtney CD” Cancel reply